Camping out was almost a way of life in my neighborhood. It seems like we camped out 2 or 3 times a week all summer long. I may be exaggerating a bit but it was definitely a regular activity.

All we needed were sleeping bags and flashlights. We unrolled our sleeping bags and our campsite was ready. We rarely fixed meals. Instead we’d decamp for dinners at home and then back to the night’s activities. We’d wander back home in the morning before we starved. There were only a couple of places where we could build a fire so these were often our preference. Being an Illinois summer minimized the need for these fires but fires sure were fun.

There was lots of open space in the neighborhood with big backyards so we had plenty of places to throw down our bags. It kind of depended on where we had been playing most of the day. If we’d been playing baseball we’d probably camp in my cousins’ yard since that was the ball field. If we’d been in and around the pasture, we’d either camp in our backyard or on the path to my grandparents’ house.   If we wanted a fire you’d find us behind another house with a good fire spot. If we got ambitious we’d hike down to Wild Cat Springs Park about a quarter mile away. It was away from our homes, you could build a fire, and it was a fun place to run around at night or even skinny dip. It was an exciting campout but it was too far to haul your sleeping bag especially home in the morning when you were hungry.

One summer my uncle found an old canvas tent that had been stored away for years. It smelled like old canvas and dry rot but we quickly set it up and used it as our base of operation for several weeks. The dry rot and direct sun quickly took its toll but it was still pretty cool until it disintegrated.

I don’t remember doing anything very exciting those nights. I think it was just fun to be out of the house and able to stay up late. Flashlight tag, ridiculous “scary stories,” and discussing our latest neighborhood project were our most common distractions.

I remember one night probably 6 of us were camping in our backyard when it started to rain. With no tent we grabbed our stuff and booked it up to our big back porch where we spread out and finished the expedition. Another night 4 of us were sitting on top of my cousins’ swing set around midnight or so discussing something. We hadn’t considered that we were much closer to houses than usual and from up there sound carried further. It wasn’t long before a backdoor opened and there was one, short, shrill whistle. The two sons of the whistler hit the ground running. We took them their gear in the morning.

Writing this, it doesn’t seem that interesting but it was so central to growing up it’s worth the telling. As much as we all loved the latest technology (TV), we were always ready to skip the summer reruns for some fresh air. Still a pretty good idea—though tentless camping has lost its appeal over the years. 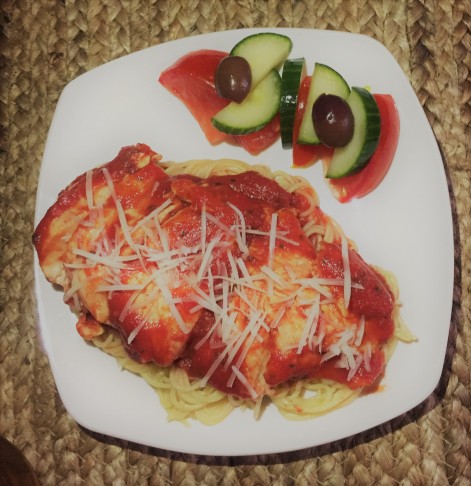 I tried this a few weeks ago but wasn’t satisfied. It was too watery and short on flavor. I liked the concept but I needed to rework it some. This version was very good. It can still be tweaked but I think it’s ready for posting. My initial intention was a simple marinara sauce and pasta topped with a chicken breast simmered in the sauce.

Reflection #1: A can of diced tomatoes (with extra tomato paste too) would be a good addition as would some capers, garlic, and diced onion. Doll it up as much as you like.

Reflection #2: Kris and I are eating smaller dinners these days so we eat half a breast each. For hardier appetites use whole breasts but count on a longer cook time of course. I would definitely use the diced tomatoes mentioned in Reflection #1 to give you enough liquid for poaching.

Reflection #3: A tied bundle of fresh herbs could replace the first three herbs above. Thyme, basil, parsley, and/or rosemary would all be good.

I like to simmer the tomato sauce for a few hours so I start mid afternoon. For a quicker meal you can do it all at once. If that’s your game plan, start the pasta water first.