One of the more memorable events in the pasture was the annual burning of the old grass. I’m pretty sure it was in the fall but I don’t recall it happening after I was 8 or 9, around the time Dad died though I’m not sure it’s connected. My grandfather, Dad, Uncle Chuck, and all the kids in the neighborhood came out for this. I think Great Uncles Louis and Henry and Uncle Stan were probably there as well.

On a sunny, windless morning the fire was started in several places and the men and older boys armed with rakes spread out to keep the fire moving. We youngsters ran around jumping over the low, slow moving flames and coughing our heads off. Truth be told, I don’t remember a whole lot of the day but it was great fun and we smelled like a bonfire the rest of the day. In later years I think it was mowed occasionally but burning the pasture was history.

Over on the west side of the pasture the land dropped off about 25 feet at a pretty steep angle and here we found several other diversions. For one thing there was a dip in the land which had become the trash pile of my great grandparents and my grandparents. Both of their homes had been there about 50 years by the time I was roaming the range so there was a lot of junk accumulated. With all the broken glass and jagged metal things it wasn’t the safest place but I don’t recall any injuries and we pulled out some great stuff to stir our imaginations. Then there was the time we (actually just me; I hid instead of running) were caught throwing bottles onto the highway below. Nothing was ever damaged but we willingly found less destructive distractions after that.

I still cringe when I recall one of our later projects. We had decided to build an underground clubhouse so we picked a spot near where a stand of sumac trees grew. There was a gentle slope that seemed to suit our purposes so we all grabbed shovels. There were probably 5 or 6 of us involved and we took turns digging down until we had a 2 foot hole about 5 feet deep. The work actually went pretty fast since it was nice, sandy soil. We held a powwow and decided it was time to turn the tunnel and start digging the approach to what would be a luxurious 12×12 room with paneling and battery powered lights. Believe me, several of us had drawn grand plans for the final project so we were all pretty excited.

As we dug sideways we decided we needed some safety precautions; after all we didn’t want the tunnel to collapse. So we found some sturdy sticks and set them along the edge of our tunnel. We also ran to the trash heap and salvaged some old garden hose for an emergency breathing pipe. By now we were maybe 8 feet over and decided to start opening up the clubhouse.

To be honest, I hadn’t done much digging after the initial hole down. Claustrophobia doesn’t run rife through my subconscious but this was beyond my comfort zone.

Anyway, the room was enlarged to about a 3 foot cube and I actually went down – briefly. I suspect it was about this time that my enthusiasm waned and I think everyone else’s followed shortly after. It was dark, cramped, stuffy and to my mind creepy. With plenty of sunny days ahead we went on to our next distraction.

I know we played in that area in later months and years but I don’t remember the remnants of our excavation nor the collapsed tunnel. What makes me queasy even now is to imagine the tunnel collapsing on any of us, especially me. It was sand for heaven’s sake! A garden hose for our air supply!? Being buried under 4 or 5 feet of sand was real and lethal possibility. It gives me the willies even now. 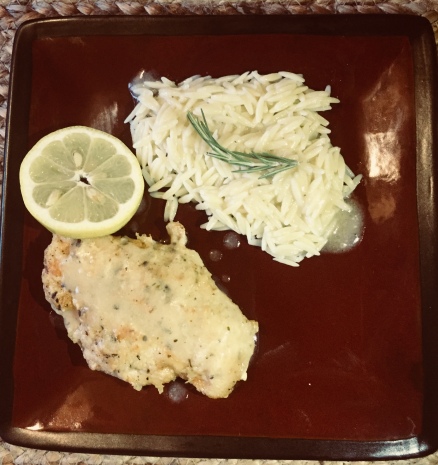 I pulled a chicken breast from the freezer when we came home last night. As usual I didn’t have a plan but around noon lemon and orzo popped into my head and here’s what we had last night.

Reflection #1: When cooking chicken breasts it’s hard to get the middle done without the edges getting dry. Many suggest pounding breasts to a uniform thickness which works well. I prefer cutting the breasts crosswise into two equal portions. They will cook uniformly without all the pounding. Your call.

Lemon Chicken with Orzo for 4

Reflection 2: Kris and I eat half a breast each these days. For bigger appetites cook more. Not much of a reflection, I know.

Reflection #3: I actually forgot to use the rosemary until we got around to the photo at which point the whole plate looked pretty dull. Some chopped rosemary would have helped some. When I was cleaning up after dinner I also found the jar of sun dried tomatoes I had set out which would also have added some much needed color as well.